Why you should use Boost.MultiIndex (Part I)

Although Boost.MultiIndex is a pretty old library — introduced in Boost 1.32, released in 2004 — I found it rather unsung and underestimated across the C++ community in comparison to other non-standard containers.

In this article, split into multiple parts, I will highlight all the benefits you can get using boost::multi_index_container instead of the standard containers: faster, cleaner and simpler code.

You have a set of struct composed by two integers x and y and do mainly two operations on it:

This is achievable quite easily with boost::multi_index_container:

The alternative and unfortunately most common way to solve this problem is to maintain two std::set, one using a comparator on x, the other one on y. However, there are few problems with this approach:

To sum up, yes, you can isolate the two containers in a separate class, wrap all the methods, deal with the exceptions to rollback the operation if something throws and code the unit tests. Good luck, though! And it will be slower than Boost.MultiIndex, and there will be another few hundreds of lines of code to maintain.

When we do C++, performance usually matters: how fast is this double-indexed boost::multi_index_container compared to the two std::set? 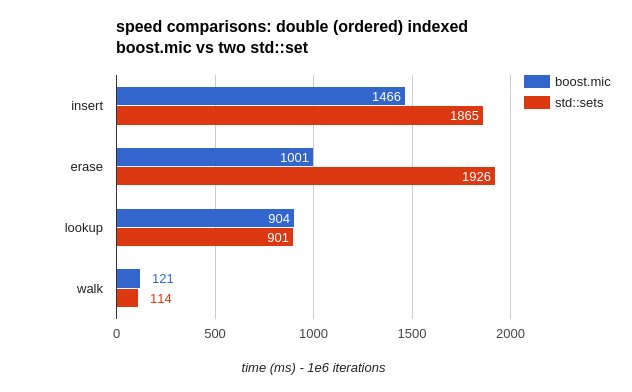 As we thought, the multi_index_container is much faster on insertion (and removal). The solution using two std::set’s forces us to duplicate all the operations that modify the container: on insertion and deletion, both sets need to be updated. This is especially bad as these operations involve memory allocations ; you can then expect this time difference to increase with the size of the value stored.

When doing a lookup or walking in ascending or descending order, performance are almost the same — as they are done only on one std::set and not the two.

The entire code of this benchmark is available on my github

We see that the lookup is slightly slower, probably due to the overhead added by the multiple indexes. What can we do about that? Well, adding a third index, not ordered this time, but hashed!

… and the lookup is now ~5times faster. What is almost free with Boost.MultiIndex — adding an index — has definitely a cost in our alternative solution: if we add a std::unorered_set, the time of insertion and removal grows significantly (and the complexity of the code that manages this additional container too). 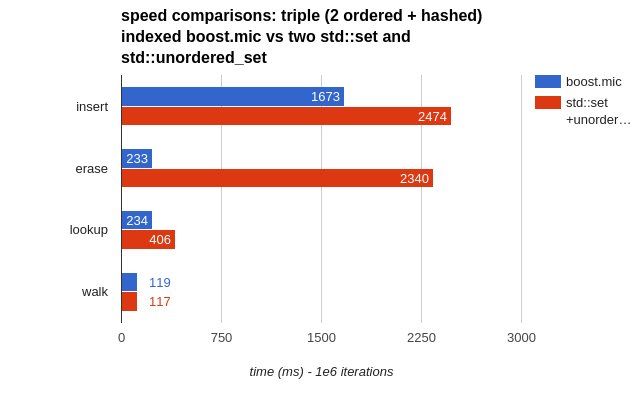 Behind the scene, boost::multi_index_container uses a system of headers in order to do its job. Each node consists in the stored object, plus a sequence of headers, depending on the indexes that are used.

There is a specific header for each index type.

The ordered index is implemented as a red-black tree, thus the header is composed by 3 pointers: one to the parent and the two children pointers. An interesting point here is that the color of the node is — on most platforms — encoded in the LSB of the parent pointer, resulting in a header of 24 bytes instead of 32 bytes (on a 64-bit systems).

As none of the std::map implementations I checked — libc++ and libstdc++ trunk (at the time of writing…) — performs such space optimization, this might explain the result we got in the previous benchmark, where the lookup was faster on boost::multi_index_container than std::set. I actually don’t know why they don’t perform such optimization, if anybody knows, don’t hesitate to post a comment!

The implementation of the hash map requires two pointers for the bucket management.

Again, std::unordered_map (with GCC 6.2 on Linux x86-64) takes more space (3 pointers), which can explain why the lookup was ~20% slower. I didn’t dig into the code of std::unordered_map, I only profiled its memory allocations.

The sequenced index is implemented as a double-linked list: the header is composed by 2 pointers, one pointing to the next node, the other one to the previous node.

The random access index is implemented with an array of pointers to the nodes. In the node itself, the header is only composed by one pointer, which points back to its corresponding element in the main array of pointers.

That’s all for now! In a second part I will explain why Boost.MultiIndex can help you even if you don’t use multiple indexes.

Thoughts from a Wall Street developer

A blog about C++, with an emphasis on low-latency, performance measurements and system programming.